Welcome to the all-new Lady Bam Podcast with Mary McDonnell. From the team behind What Would Sharon Raydor Do?, we’ll be expanding on the positive voices and themes that were at the heart of WWSRD, and look to broaden those as we explore current events, media and pop culture, and more with Mary McDonnell and special guests on the Lady Bam Podcast! 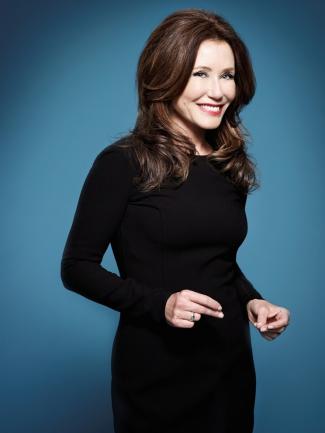 MARY MCDONNELL is a two-time Oscar-nominated actress known for bringing powerful and complex female characters to the film and television landscape.

McDonnell recently starred as “Commander Sharon Raydor” on TNT’s hit series, Major Crimes, where she earned an Emmy Nomination for her portrayal of a woman at the pinnacle of her career navigating leadership in the traditionally male-dominated field of law enforcement. The series was honored by multiple community organizations including the LAPD, LAPD Reserve Foundation, GLSEN, Imagen Foundation and Covenant House.

McDonnell starred in Syfy’s AFI and Peabody award-winning Battlestar Galactica in her critically-praised performance as ‘President Laura Roslin’ (2008 Saturn Award – Best Actress on Television). An allegory of 9/11 and the War in Iraq, the series was widely acclaimed for its examination of the issues of war and human rights, and in 2009 McDonnell appeared on a panel at the United Nations to discuss the parallels between the show and real-world issues of terrorism, race relations and gender equality.

McDonnell’s Broadway credits include Tennessee Williams’ Summer and Smoke, the title role in Wendy Wasserstein’s Pulitzer Prize-winning The Heidi Chronicles and Emily Mann’s Execution of Justice.
Extensive film credits include Oscar and Golden Globe nominations for her portrayals of “Stands with Fist” in the Academy Award-winning film Dances with Wolves and as a paraplegic soap opera star in John Sayles’ Passion Fish. Other films include Lawrence Kasdan’s Grand Canyon and Mumford, Sneakers opposite Robert Redford and Sidney Poitier and the global hit film Independence Day.

In 2015 McDonnell received the Gina Award from Women in Film, and the Leadership Excellence Advocacy (LEA) Award in 2017 from Women in Cable Telecommunications. In 2018 McDonnell was honored with the Pell Award for Lifetime Achievement in the Arts, presented by Trinity Repertory Company.

Currently McDonnell is producing projects for TV and film, as well as hosting the “Lady Bam Podcast,” exploring conversations at the heart of the matter with an emphasis on women in the entertainment industry.